NCC AT VEMANA INSTITUTE OF TECHNOLOGY

Vemana Institute of Technology consist of Army wings of NCC

"Unity and Discipline" can make students better citizens of tomorrow.

Over the years, the National cadet Corps has developed into the premier youth organization in the country. Today it has been established itself as a variable auxiliary to the education system. The Corps is engaged in the character building of the student community, as a national investment for the future. NCC helps students in shaping a multifaceted personality.

Our Institute is proud to inform thatthe Platoon of Vemana IT NCC is started in the Training year 2021-22.

The 'Aims' of the NCC laid out in 1988 have stood the test of time and continue to meet the requirements expected of it in the current socio–economic scenario of the country. The NCC aims at developing character, comradeship, discipline, a secular outlook, the spirit of adventure and ideals of selfless service amongst young citizens. Further, it aims at creating a pool of organized, trained and motivated youth with leadership qualities in all walks of life, who will serve the Nation regardless of which career they choose. Needless to say, the NCC also provides an environment conducive to motivating young Indians to join the armed forces.

To Create a Human Resource of Organized, Trained and Motivated Youth, To Provide Leadership in all Walks of life and be Always Available for the Service of the Nation.
To Provide a Suitable Environment to Motivate the Youth to Take Up a Career in the Armed Forces.
To Develop Character, Comradeship, Discipline, Leadership, Secular Outlook, Spirit of Adventure, and Ideals of Selfless Service amongst the Youth of the Country.

The need for having motto for the Corps was discussed in the 11th Central Advisory Committee (CAC) meeting held on 11 Aug 1978.

The final decision for selection of "Unity and Discipline" as motto for the NCC was taken in the 12th CAC meeting held on 12 Oct 1980.

The NCC is a responsive, learning and continuously evolving organization. Its activity is guided by certain Core Values that we endeavour to instill among all ranks of the NCC.

These include the following:
A sense of patriotic commitment to encourage cadets to contribute to national development.
a. Respect for diversities in religion, language, culture, ethnicity, life style and habitat to instill a sense of National unity and social cohesion.
b. Abiding commitment to learn and adhere to the norms and values enshrined in the Indian Constitution.
c. Understanding the value of a just and impartial exercise of authority.
d. Ability to participate in community development and other social programme.
e. A healthy life style free of substance abuse and other unhealthy practices.
f. Sensitivity to the needs of poor and socially disadvantaged fellow citizens.
g. Inculcating habits of restraint and self-awareness.
h. Understanding the values of honesty, truthfulness, self-sacrifice, perseverance and hard work.
i. Respect for knowledge, wisdom and the power of ideas.

WE THE CADETS OF THE NATIONAL CADET CORPS,
DO SOLOEMNLY PLEDGE THAT WE SHALL ALWAYS UPHOLD THE UNITY OF INDIA.
WE RESOLVE TO BE DISCIPLINED AND RESPONSIBLE CITIZEN OF OUR NATION.
WE SHALL UNDERTAKE POSITIVE COMMUNITY SERVICE IN THE SPIRIT OF SELFLESSNESS
AND CONCERN FOR OUR FELLOW BEINGS. 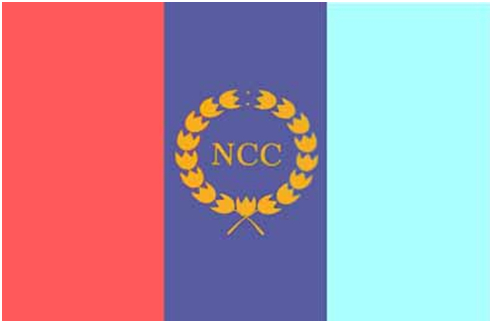 The NCC flag for various units of the NCC was first introduced in 1951. The flag was of same pattern, colour and size as was used by various regiments of the Army. The only difference was that it had the NCC badge and unit designation placed in the centre. Later on it was felt that the flag should be in keeping with the inter-service character of the Corps. In 1954 the existing tricolour flag was introduced. The three colours in the flag depict the three services of the Corps, red for the Army, deep blue for the Navy and light blue for the Air Force. The letters NCC and the NCC crest in gold in the middle of the flag encircled by a wreath of lotus, give the flag a colourful look and a distinct identity.

1. The cadet must have attended a minimum of 75% of total training periods laid down in the syllabus for the first and second years for Senior Division/Wing NCC (All Wings).

2. Break in the NCC Training Tenure of the cadet SD/ SW prior to appearing in the exam should not exceed more than 18 months at one time after his discharge to count his tenure for Certificate 'B' Examination.

3. In case the break exceeds 18 months the following procedure will be adopted :-
a. If he had been on the unit rolls for a minimum of two years before his discharge and had attended 75% of the total periods during his NCC Tenure he will need another 36 periods of training to become eligible to appear for Certificate 'B' Examination.
b. In all other cases where above conditions are not fulfilled the cadet must attend a minimum of 75% periods of the first & second years of training.

5. Cadets possessing Certificate A will be awarded 10 bonus mark.

1. The cadet must be in possession of Certificate B.

2. The cadet must be in third year of Senior Division/Senior Wing NCC Training.

3. The cadet must have attended a minimum of 75% of the periods of 3 rdyear syllabus during the academic session.

4. Break in the NCC Training Tenure of the cadet SD/SW prior to appearing in the Exam should not exceed more than 18 months at one time after his discharge to count his previous tenure for Certificate 'C' examination.

5. In case the break exceeds 18 months the following procedure will be adopted:-
a. If he had been on the unit rolls for a minimum of two years before his discharge and attended 75% of the total period during his NCC Tenure he will need another 30 periods of training to become eligible for Certificate 'C' examination.
b. In other cases where above conditions are not fulfilled, the cadet must attend a minimum of 75% periods of the third year of training.

6. Must have attended one ATC and in addition one of the following in a three year tenure:-
a. Annual Training Camp (This is in addition to one mentioned above).
b. Republic Day Camp at Delhi (RDC).
c. Centrally Organized Camp (COC). Ordered by HQ DGNCC
d. Para Training Camp (PTC).
e. National Integration Camp (NIC) (When applicable for SD/ SW Cadets).
f. All India Trekking Expedition (HQ DGNCC Organized).
g. All India Mountaineering Expedition (HQ DGNCC Organized).

NCC and NSS units of Vemana Institute of Technology celebrated the 73rd Republic day on 26th Jan 2022. Associate NCC officer Mr. Muni Krishna.L, NSS program officer Mr. S Puneethand Physical director Mr. Mohammed Rizwan graced the occasion. NCC Cadets and volunteers along with a few teaching and non-teaching staff members, participated in the event. Prof. Ashwathappa C.M Vemana IT spoke to volunteers about the importance of Republic day. He also hoisted the Indian flag. NCC cadets distributed the sweets to all volunteers, and the celebration ended with the NCC and NSS songs. 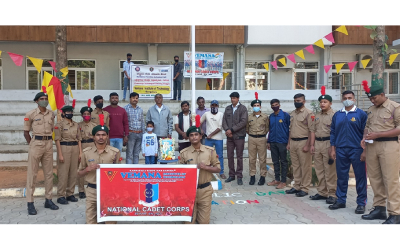 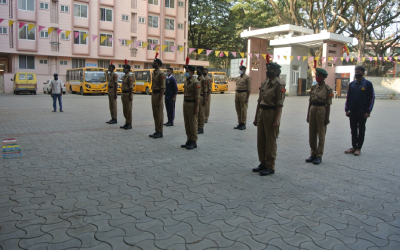 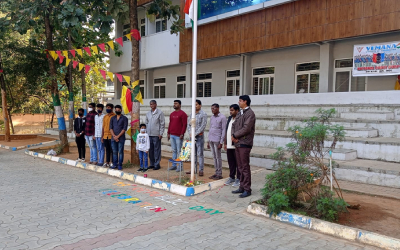 Martyrs' Day was observed on 30th Jan 2022 at Vemana I T campus, remembering the legacy of our freedom fighters. Martyrs' Day, also known as Shaheed Diwas, is observed across the country on 30 January every year. The day marks the death anniversary of Mahatma Gandhi. On this day, we remember the slain freedom fighters who laid down their lives for our country's independence.

It was organized by NCC, NSS and ISTE units of Vemana I T. The Cadets of NCC, volunteers of NSS, members of ISTE committee and other students participated in the event. The programme was inaugurated and chaired by beloved principal of Vemana I T, Dr. Vijayasimha Reddy B G. The gathering observed 2 minutes silence as a mark of respect for our martyrs. It was followed by speeches on Mahatma Gandhi and Subhash Chandra bose by two of the NCC cadets. The participants also witnessed a documentary videos on both the freedom fighters.

Dr. Vijayasimha Reddy B G, principal, Vemana I T, Spoke to the gathering and said "Mahatma Gandhi was a prominent political and spiritual leader of the Indian Independence movement. He also received international fame for his non-violent protest theory to achieve political and social progress. Mahatma Gandhi is not only a name but a symbol of peace and non-violence in the whole world. No doubt, he became popular as the Father of the Nation by his followers and is also known as Bapuji."

He also highlighted the efforts of students and staffs in organizing the martyrs day and motivated the cadets of NCC, volunteers of NSS and ISTE members to continue the spirit and legacy our freedom fighters have left behind. "It is the prime duty of every indian to remember the sacrifices our freedom fighters made to free our country and also the freedom must be used in righteous way", he added further. NCC coordinator gave the vote of thanks and the programme ended with NCC song & our National anthem. 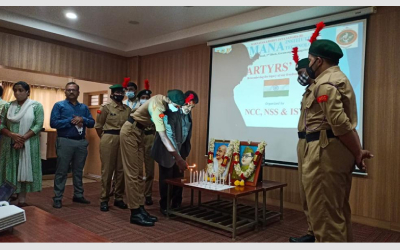 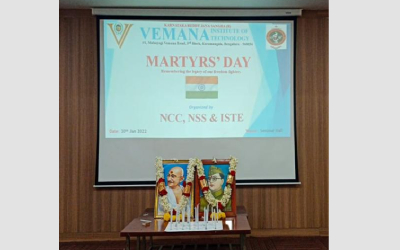 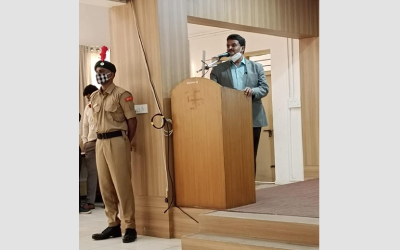 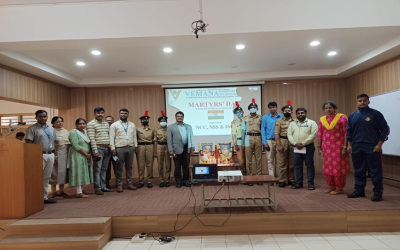 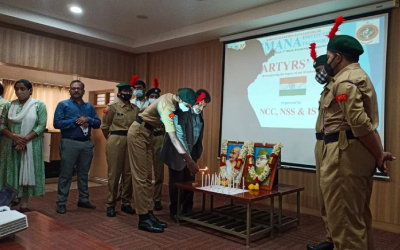 With a mission to impart the quality technical education to each and every segment of society, ReddyJana Sangha coveted dream came into existence in 1999 with the beginning of Vemana Institute of Technology, guided by KRJS Management.

All Rights Reserved To Vemana IT
Site By Websmartindia